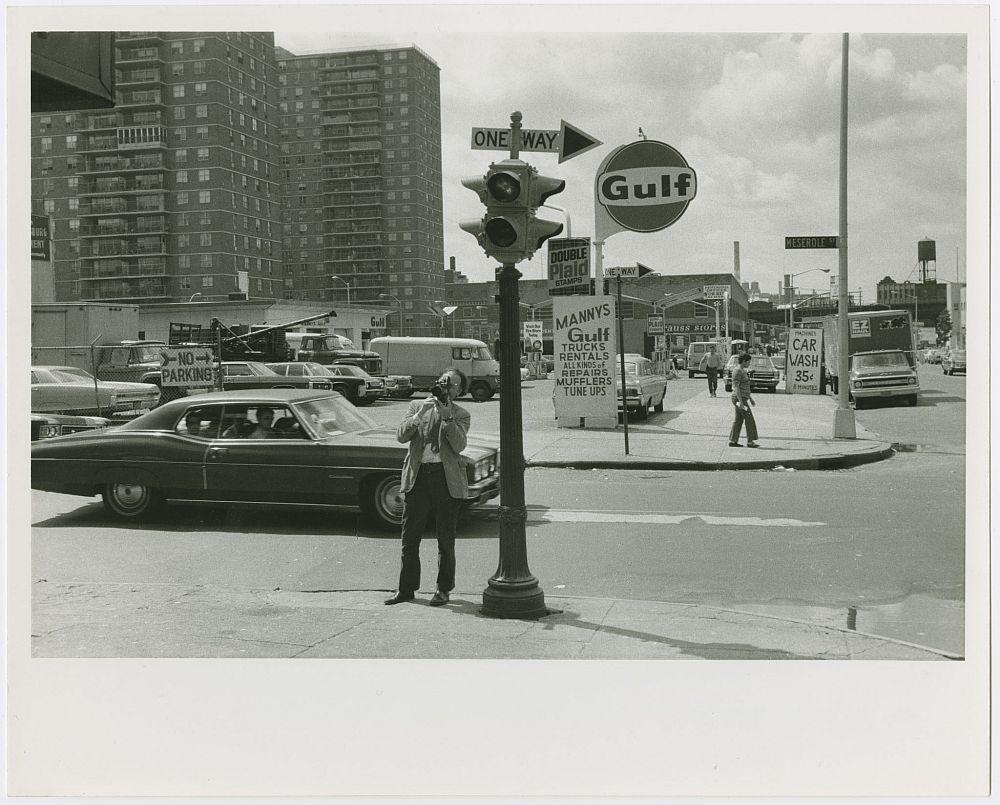 Since March of 2020 Open Archives has send out a weekly digital release offering a glimpse into the personal archives of Jonas Mekas. Every item shared was selected by Sebastian Mekas, Director of the Jonas Mekas Studio, with the goal of keeping the studio practice alive and showing its long term relevance through its diaristic and meticulously cataloged collections of artwork, artifacts, and other materials.

An Open Archives presumes a veritable archive. That of Jonas Mekas comprises more than eight decades of collected material of the famed filmmaker, poet and impresario of the avant garde.

The hundred or so items, presented publicly for the first time – photographs, manifestos and scribbles, poems and faxes, as well as clippings, tchotchkes and working tools – broadly expand the understanding of this cultural figure as well as the many decades of shifting Zeitgeist through which he moved. The exhibition “Under the Shadow of the Tree” curated by the duo Francesco Urbano Ragazzi at the Pavilion de l’Esprit Nouveau places the building – a residential prototype built in 1925 by Le Corbusier and Pierre Jeanneret, reconstructed in a faithful copy in Bologna in 1977 by Giuliano and Glauco Gresleri with José Oubrerie – in dialogue with works by Mekas, which brings out from the big screen his film diaries. As if it were a sounding board, the entire pavilion is filled with the sounds of the audio diaries with which the artist has recorded life in New York. The tree that stands out in the center of Le Corbusier’s architecture, crossing its ceiling, is instead the element around which revolves a reflection in images on the role of nature in the work of this author, a fundamental figure in the history of avant-garde cinema American.

More information on exhibition can be found here. 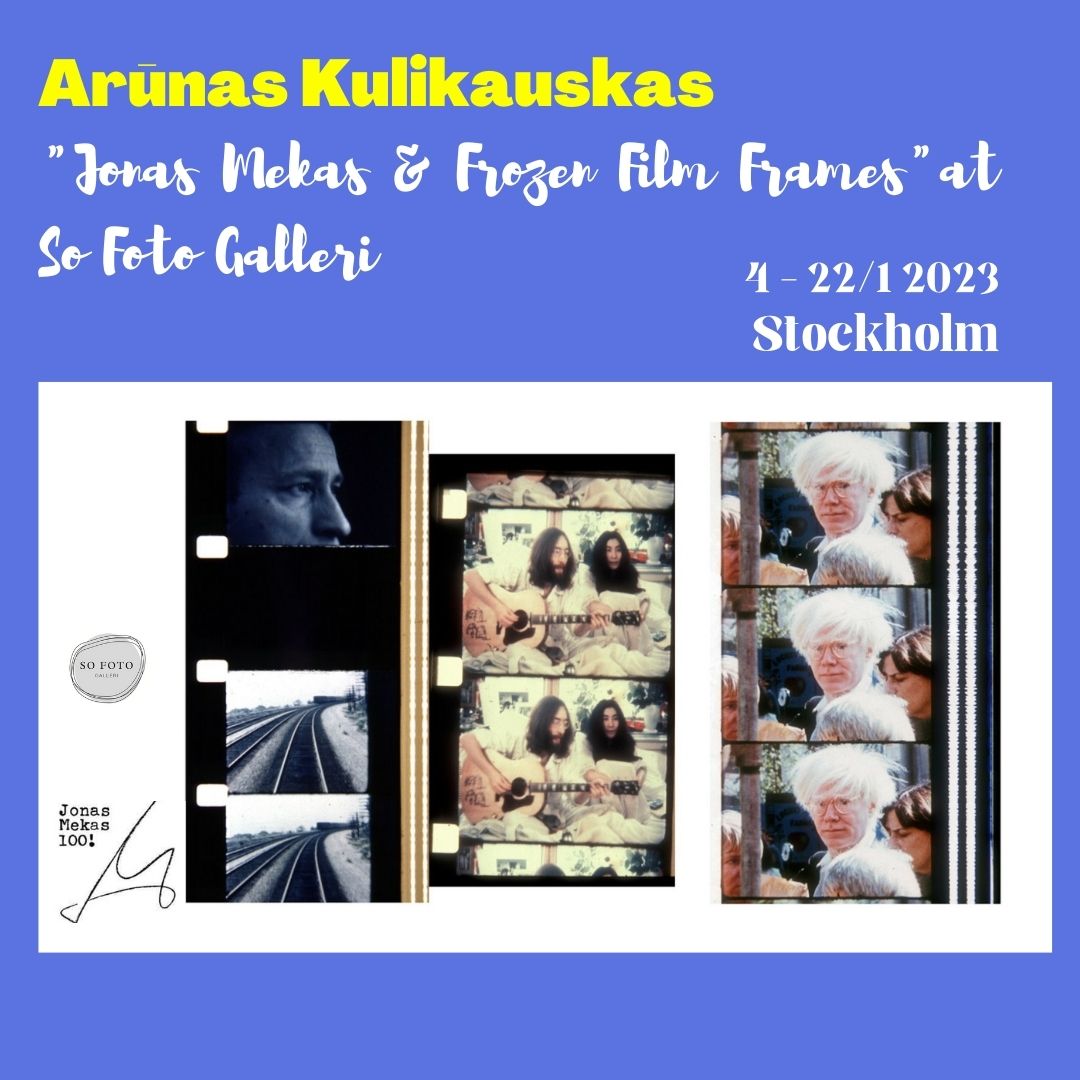 Arūnas Kulikauskas is a photographer, freelance artist & graphic designer born in Kaunas, Lithuania 1959. From 1990 he lived and worked in NY, USA, where Arūnas worked closely with Jonas Mekas at the Anthology Film Archives. Now Arūnas lives in Lithuania.

“I photographed Jonas and everything around him. I worked for him at Anthology for over 10 years (1990 – 2001). I took photos at his house, in bars and streets of New York, during movie premieres, during fundraising events, concerts, auctions. With friends and fellow filmmakers, with university students and professors, with people who came to meet him and say thank you for his help or films, with art collectors and Nobel laureates. I used to visit Jonas even after I moved to Lithuania. After his death, I collected all the slides and negatives where his face was. More than 300 hundred images have been collected.”  explains A. Kulikauskas. 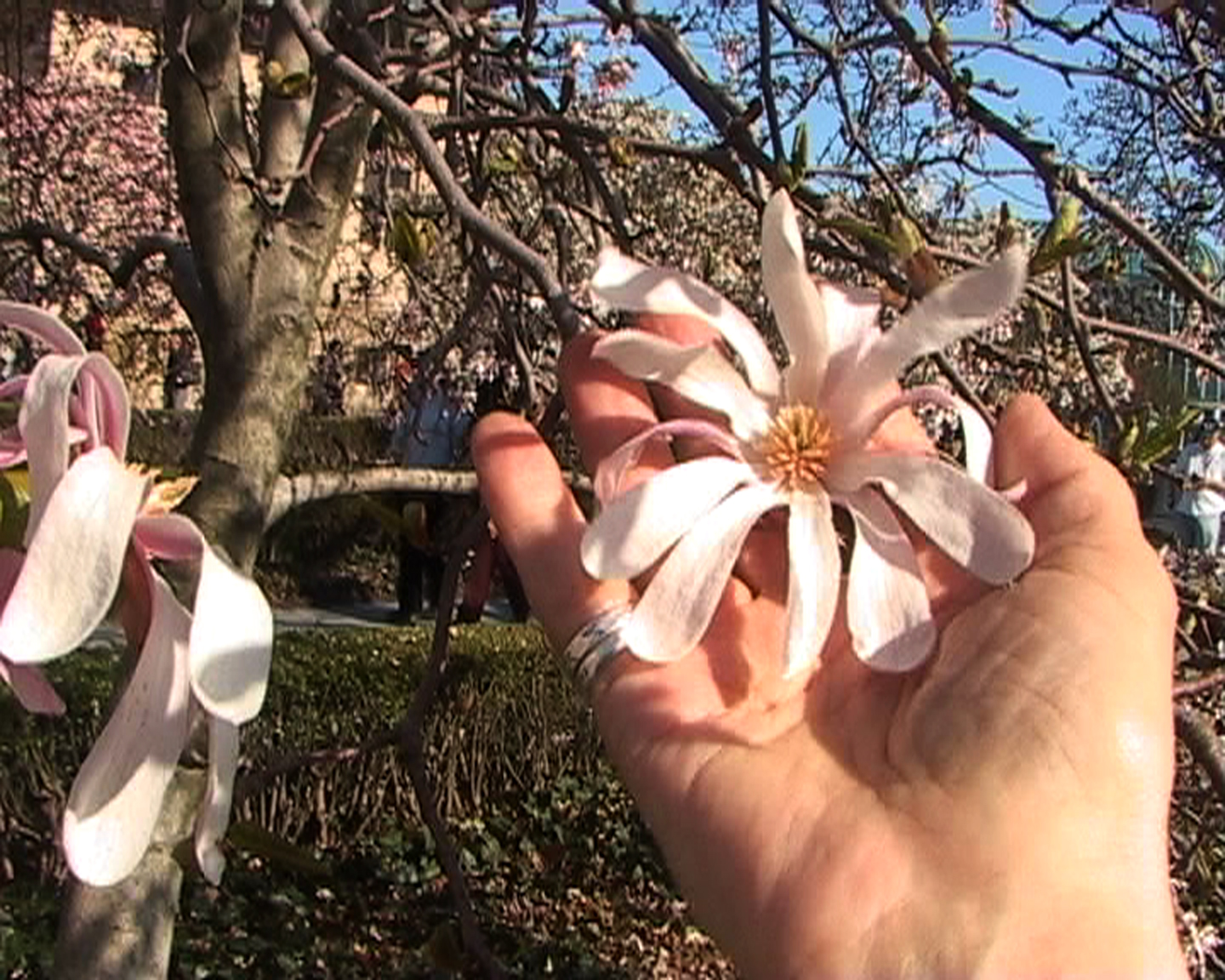 Microscope is very pleased to present “A small table with a bottle of wine, garlic, sausage, bread,” a solo exhibition of works by Jonas Mekas, taking place on the 100th anniversary of his birth on December 24, 1922.

Throughout his nearly 80-year-long artistic lifetime, Mekas embraced the diaristic form, arguably more than any other through cameras, sound devices, and written journals, while maintaining a radical dedication to elevating the personal and poetic aspects of daily life, always seeking to capture the essence of the moment. Mekas recorded what was happening in front of him in the present, the here and now. With an emphasis on that which is typically regarded as the small and insignificant, he was unwaveringly committed to sharing “fragments of paradise on Earth.”

More information on this exhibition can be found here. 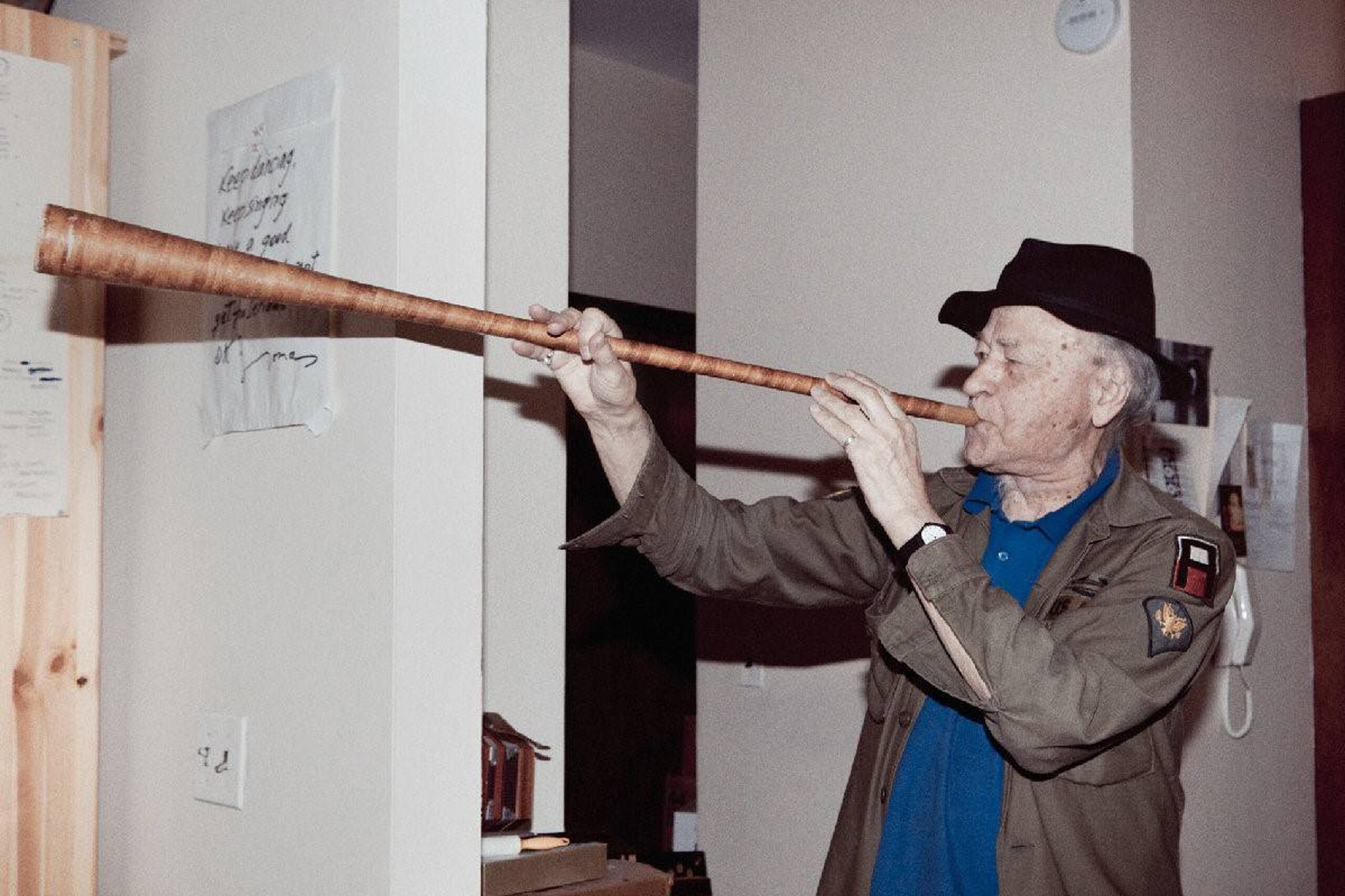 „Keep Singing. In Memoriam Jonas Mekas”, a festival, dedicated to Jonas Mekas, one of Lithuania’s most prominent artists, will take place in Vilnius from 14-17 December. The festival, consisting of two parts – a photo exhibition and a series of improvisational music, dance and poetry performances – will invite all Vilnius residents to remember the great Lithuanian artist.

Jonas Mekas Visual Arts Centre (JMVMC) together with percussionist and good friend of Jonas Mekas, Dalius Naujokaitis-Naujo, and talented Lithuanian and foreign musicians invite everyone to take part in the events of the festival to remember and thank the great Jonas Mekas for his immense contribution to our culture, freedom and open worldview. The festival will be full of music, fun, sound and entertainment. Just the way Jonas Mekas liked it. Keep Singing!

On 15-17 December from 19:30, the festival „Keep Singing. In Memoriam Jonas Mekas” will take place at The House of Signatories. 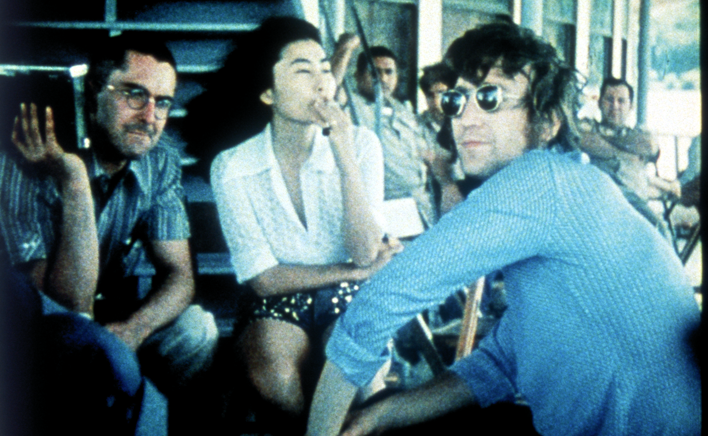 Joining a global celebration to mark the late avant-garde filmmaker Jonas Mekas’ 100th birthday, A4 is screening his ‘Zefiro Torna or Scenes from the Life of George Maciunas’ in our Library. This, in parallel to the opening of The Future Is Behind Us – an exhibition in our Gallery.

More information on events can be found here. 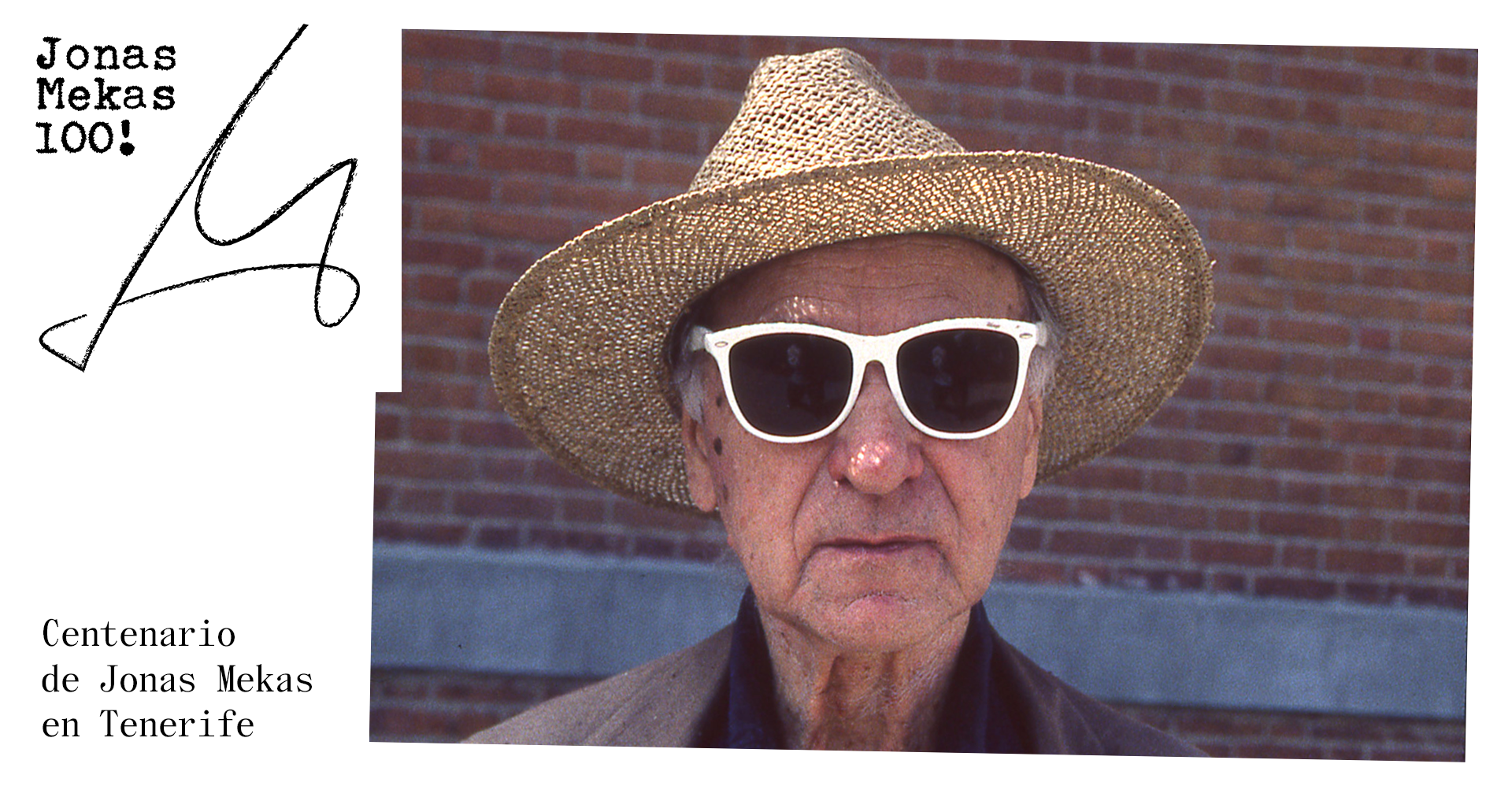 Jonas Mekas centennial in Tenerife will be celebrated with a series of events. On 17 December the film To Talk to the Very Heart will be screened at the Lithuanian diaspora in Tenerife meeting. An opening of Hollis Melton’s photography exhibition’s La luz de Jonas Mekas and screening of the film As I Was Moving Ahead Occasionally I Saw Brief Glimpses of Beauty will be held at the Encuentro Multicultural “Tenerife Migrante” on 18 December.

More information on events can be found here. 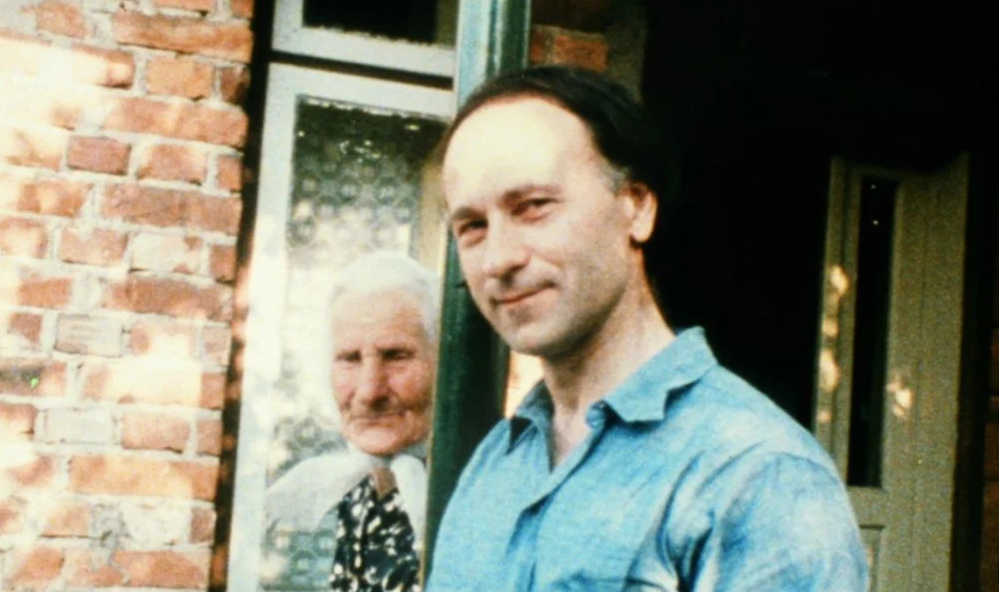 The National Audiovisual Institute (KAVI) in Helsinki celebrates the 100th anniversary of Jonas Mekas with a programme of four feature films, a short film programme, a photo exhibition as well as a panel discussion and introductions. The programme kicks off on the first weekend of December and runs until mid-January in the cinematheque of KAVI, Kino Regina.

The Jonas Mekas programme starts on 2 December with a screening of Mekas’ short films and film diary entries.  3rd December begins with a conversation about Jonas Mekas’ work and legacy. The participants include two international guests: Kristijonas Gukauskas, a London-based Lithuanian art historian and independent curator, and Arunas Kulikauskas who has worked closely with Jonas Mekas for 22 years at the Anthology Film Archives. Photos by A. Kulikauskas are exhibited in the lobby of Kino Regina during the film programme in December and January. He will be also introducing the screening of the feature film Reminiscences of a Journey to Lithuania (1972) following the panel discussion and the short film programme on 4 December.

The other films in the programme include Walden (1969), Lost Lost Lost (1976) and As I Was Moving Ahead Occasionally I Saw Brief Glimpses of Beauty (2000), all screened from 16 mm film.

For a complete programme at Kino Regina visit link here. 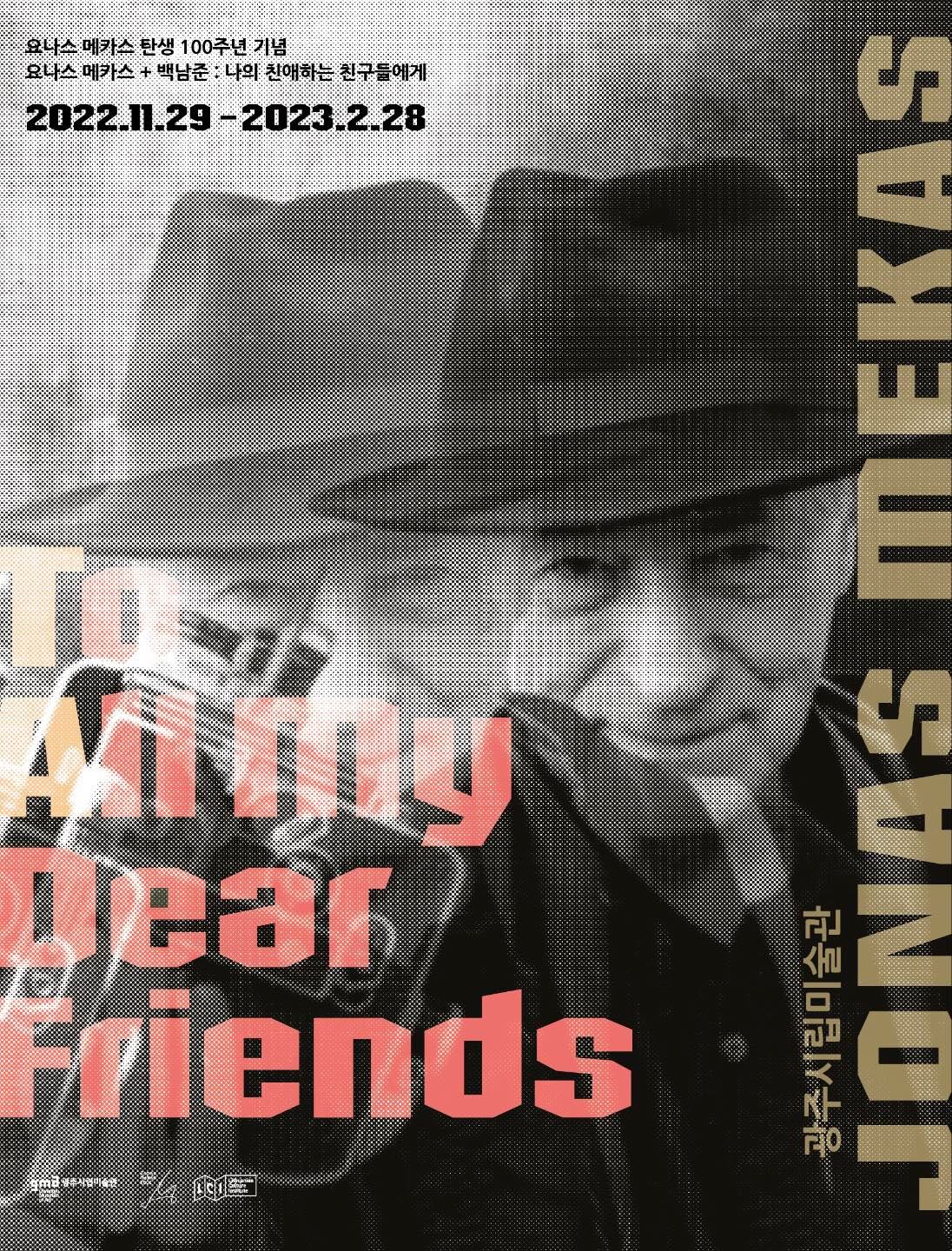 Gwangju Museum of Art is pleased to present “To All My Dear Friends”, an exhibition to commemorate the 100th anniversary of Jonas Mekas’ birth. The exhibition focuses on Jonas Mekas’ important films that have been created throughout his life as Mekas was a master of American avant-garde cinema and established a new horizon in the history of experimental film through the format of ‘diary film.’ The exhibition begins with the idea that the stories that many of his films present are indeed his letters with wishful greetings he wanted to deliver to his friends.

The exhibition also illuminates his friendship with Nam June Paik, whom he worked with for some time as an immigrant and exile in New York. Nam June Paik’s Sistine Chapel where images of Fluxus artists at the same time working with Jonas Mekas are projected is on display.

More information on this exhibition can be found here.

To honor Jonas Mekas’ memory, we present a special program, dedicated to the exceptional artist. Apart from the Jonas Mekas Retrospective: Short Films (1966-2002), it includes an audiovisual performance inspired by Mekas’ film “As I was Moving Ahead I saw brief Glimpses of Beauty” (2000), performed by Julius Zubavičius, and the talk “I Make Home Videos Therefore I Live”.

Artist Denisas Kolomyckis, will give a talk about Jonas Mekas, performances and documentation of processes, friends and practices that have followed through the last ten years of Jonas. Talk will be open for questions and possible discussions about Jonas Mekas‘ films together with the presentation of the current practices of Denisas. Artist will share his experience and stories on life in New York and works that have been highly influenced by Mekas.